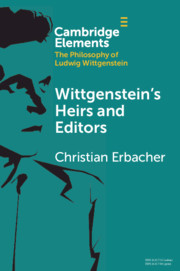 Livestream Discussion Panel from 17:00 GMT, Q&A starting at 19:00 GMT on Wittgenstein Initiative on YouTube. The video recording will be later permanently available.

If you wish to ask your questions directly during the Livestream, please let us know at office@wittgenstein-initiative.com. You will be sent the Chat ID a day before the Livestream starts. Please pay attention to your time zone when scheduling the chat!

Ludwig Wittgenstein is one of the most widely read philosophers of the twentieth century. But the books in which his philosophy was published – with the exception of his early work Tractatus Logico-Philosophicus – were posthumously edited from the writings he left to posterity. How did his 20,000 pages of philosophical writing become published volumes? Using extensive archival material, this book reconstructs and examines the way in which Wittgenstein’s writings were edited over more than fifty years, and shows how the published volumes tell a thrilling story of philosophical inheritance. The discussion ranges over the conflicts between the editors, their deviations from Wittgenstein’s manuscripts, other scholarly issues which arose, and also the shared philosophical tradition of the editors, which animated their desire to be faithful to Wittgenstein and to make his writings both available and accessible. The book can thus be read as a companion to all of Wittgenstein’s published works of philosophy.