Home / Articlestitle_li=News / The Quiet Seriousness of the Sognefjord

The Quiet Seriousness of the Sognefjord

Exactly 200 years ago, Norway was truly discovered by the artists who traveled to Sogn. A hundred years later, the same landscape was rediscovered by the 20th century’s foremost philosopher, Ludwig Wittgenstein.

These were two essentially different discoveries – carried out by the Norwegian forerunners of national romance and a philosopher in exile from the intellectual metropolises of Vienna and Cambridge.

The pictures of Norway

One of the greatest exhibitions of national romantic art opened in June 2019 in the splendor of the Munthe House in Ytre Kroken in Luster. Three miles farther, inwards the Sognefjord’s inner arm Lustrafjord, Wittgenstein’s small log house was reopened after being dismantled for 60 years. Two different houses in the same strong landscape.

The artists Johannes Flintoe and William Maximilian Carpelan left the mountain from Christiania separately in the summer of 1819. They exhibited their pictures the following year at Tegneskolen and aroused attention: this art, these images of Norwegian nature and people came to play a key role in art history and culminated in the national romanticism flowering around 1850. 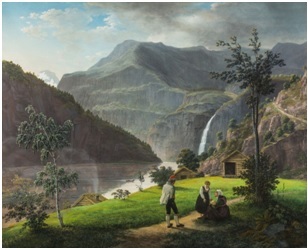 View of Johannes Flintoe’s painting Skjolden with Eidsvatnet, against Fortundalen in Sogn, 1834. Owner: Norsk Kultursenter, Pål Sagen.
The philosopher Ludwig Wittgenstein’s house is today on the mountainside to the left.

The mountains, the fjords, the people

The military and artistic family Munthe created contacts between the parish and the artists in Christiania in the years after 1814, and both Norwegian and foreign painters continued to travel there in the decades beyond the 1800s.The Munthe house became thus an intense and rich artist environment, located where they found their main motives: the mountains, the waterfalls, the fjords, the folk culture and the people’s life.

Among the works of art EXHIBITED in the Munthe house from 1763 are also Tidemand, Gude, JC Dahl – and Carl Johan Fahlcrantz’s lithographs for Esais Tegnérs Frithiofs saga from 1825, based on the Icelanders’ story about Fridtjov the maiden, who grew up in Sogn.

And there is another cultural-historical connection between the two markings in Luster: in the wake of many Germans’ and Austrians’ “Drang nach Norden” and Emperor Wilhelm II’s annual travel to Sogn for 25 years, the philosopher Ludwig Wittgenstein also sailed into the Sognefjord in the fall of 1913 and saw the Emperor’s gift to the Norwegian people at Vangsnes, the 22 meter high Fridtjov statue.

The 24-year-old Wittgenstein was a philosopher in exile, on a voluntary “escape” both from one of Austria-Hungary’s greatest family fortunes, which he wanted to be independent from, as well as from England’s sharpest philosophers at Cambridge – a place which the genius apparently found distracting.

Wittgenstein exiled himself several times in his life – went to Wales, Ireland and Norway. In Skjolden in Sogn, he spent altogether two years between 1913 and 1950. The foundation of his early thinking was laid there (Tractatus Logico-Philosophicus) and important parts of the late philosophy were written (Philosophical Investigations).

Wittgenstein’s house can be seen in the mountainside on the left. © Jon Bolstad

But Wittgenstein traveled back, again and again, and achieved his most productive periods in Skjolden: “I can’t imagine that I could have worked anywhere as I do here. It’s the quiet and, perhaps, the wonderful landscapes; I mean, its quiet seriousness.”

For 60 years, there was only the empty foundation of Wittgenstein’s house on a steep mountain side, called “Austria” (Østerrike) by the locals. In 1919 Wittgenstein gave the house as a gift to a friend in Skjolden, but continued to live there himself when visiting Norway.

Fortunately, after the demolition, care was taken of all the timber, roof tiles and windows, and now the solid, small house has finally been restored and opened. Perhaps it can be a place of work for thinkers and artists for part of the year.

1819 and 1919. Two houses. Two centuries. Quite different people created the basis for national romance and for new philosophy. But they saw the same landscape: the quiet seriousness of the Sognefjord.

Knut Olav Åmås is Executive Director of the Fritt Ord Foundation. He is also a columnist in Aftenposten. Dr. Åmås is member of the Board of Directors of the Wittgenstein Initiative.

This article was first published in Aftenposten on 20 June 2019.
Translation by Knut Olav Åmås and Radmila Schweitzer 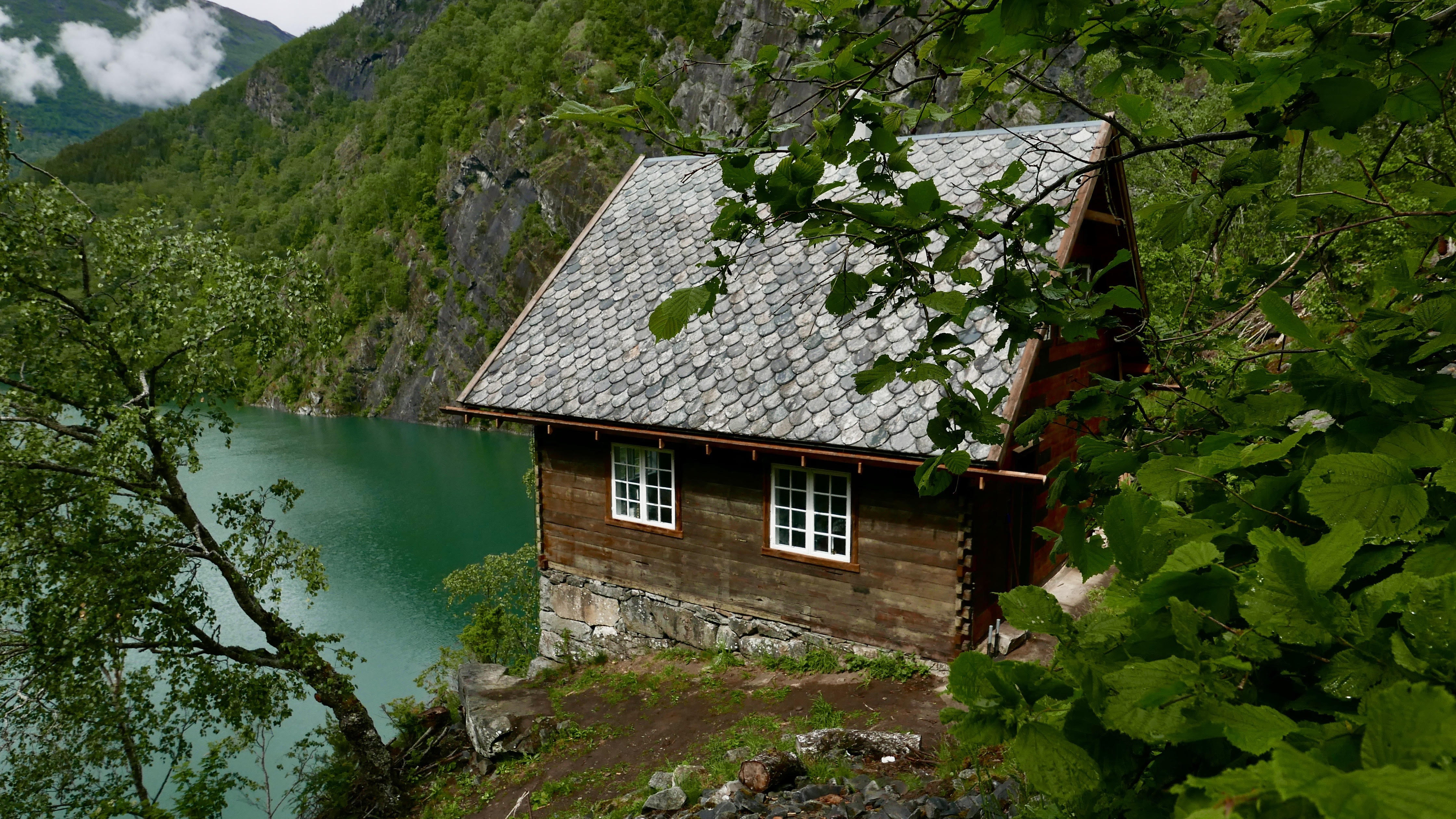